Indicator: Use mathematics and computational thinking to provide evidence that regardless of the type of change that occurs when heating, cooling, or combining substances, the total weight of matter is conserved. Examples could include melting an ice cube, dissolving salt in water, and combining baking soda and vinegar in a closed bag. (PS1.A, PS1.B)

Indicator: Plan and carry out investigations to determine the effect of combining two or more substances. Emphasize whether a new substance is or is not created by the formation of a new substance with different properties. Examples could include combining vinegar and baking soda or rusting an iron nail in water. (PS1.B)

Indicator: Develop and use a model to describe that matter is made of particles on a scale that is too small to be seen. Emphasize making observations of changes supported by a particle model of matter. Examples could include adding air to expand a balloon, compressing air in a syringe, adding food coloring to water, or dissolving salt in water and evaporating the water. The use of the terms atoms and molecules will be taught in Grades 6 through 8. (PS1.A) 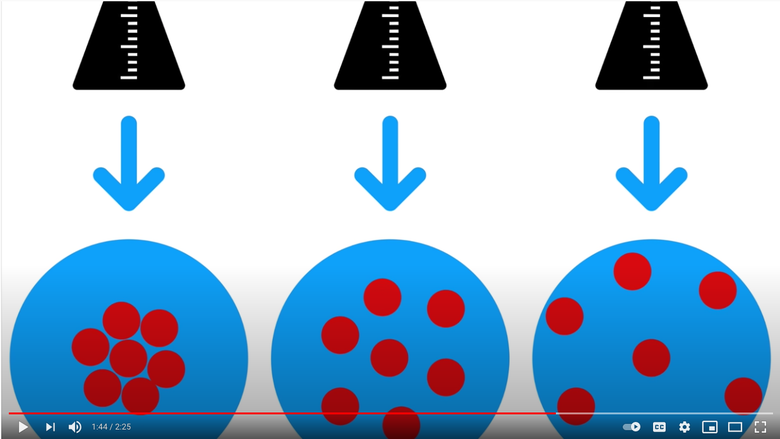 This lesson plan utilizes filmmaking to solidify student understanding of scientific phenomena related to matter. While the plan is tied to 5th grade SEEd standards, it can be adapted to meet any SEEd standard at any grade level, particularly in upper elementary, middle school, and high school.

(This resource's preview image was created by the author of this lesson plan.)

In this lesson, the teacher will guide students in creating films that document the behavior of matter as demonstrated in various scientific experiments.

Lesson sequence: This lesson can be taught at the end of the unit as a way for the teacher to review concepts with students and to allow students to show mastery. Or, the lesson can be adapted to be a unit plan in which students record experiments conducted as part of initial instruction instead of review.

Format: This lesson is planned for in-person, synchronous instruction.

Filmmaking can seem like a daunting project the first couple times it is done in the classroom. Consider starting with a smaller, more simple project first so that the students can get used to the basics of iMovie as well as the planning process and filming techniques. In the end, filmmaking is worth the time and effort because filmmaking in the classroom increases student engagement and learning. The following graphic attached at the bottom of this section helps explain this.

To teach this lesson you will need an understanding of properties and changes of matter. The following resources can help you teach this topic:

Note: This lesson plan references Apple tools and applications. It can also be taught with other software and apps.

Students will need to have an understanding of the properties and changes of matter as outlined in SEEd strand 5.2.

The lesson progresses, the teacher can use the scripts and storyboards generated to gage student understanding and offer additional support or extension opportunities as appropriate. It may be necessary to offer additional scaffolds for groups that need it, including more direct assistance and modeling of experiment procedures. In some cases, it may be necessary for the teacher to conduct an experiment, rather than the students themselves, while the students film and gather data. The Slides and Nearpod resources list earlier in this plan provide questions, scenarios, and images intended to activate background knowledge. The lesson could be personalized by allowing students to choose various styles of filmmaking to employ. Discussions about digital citizenship and media literacy can and should be part of the filmmaking process as well, particularly for students who struggle with the concepts of safe posting, copyright, and source citation, or if these concepts have not yet been introduced to the students.

Next, they will use Notes or Pages to write a documentary script that explains the concepts in their own words so that their audience can learn the concepts as well. They will then create a storyboard in Notes or Pages that shows how their script will be supported and enhanced using video of their experiment, photos, graphics, graphs, charts, narration, music, and titles.

Finally, they will import all the resources they have filmed, created, or found into iMovie to edit together what they planned in their storyboard. They will use their scripts to record narration for their documentary and will add titles for clarification and to focus on important points. They will export their finished documentaries to be turned in to their district film festival or other competition and will use AirPlay to showcase their work to their classmates and teacher.

Learning Activities:
I Do
Review the concepts that go along with each of the objectives in SEEd strand 5.2. This could be done using a Keynote presentation, a Kahoot!, a classroom discussion, etc. The following Slides presentations and Nearpod lessons may be referred to as you review. (You may need to log in to eMedia in order to access these resources.)

Explain the objectives and provide a summary of the student project. Show the students a sample documentary so they have an idea of what their finished product may be like. (This documentary about physical change may be used as an example.)

Divide your class into 4 groups. Assign one of the unit’s 4 objectives to each group, or let the groups choose their objectives.

In addition to researching concepts and information, work with the students to select an experiment they will conduct that demonstrates the concepts in their objective. As you research, guide the students in recording important information using Notes. Have them copy and paste the link to their chosen experiment. They may want to create a checklist of materials they will need to conduct their experiment.

Y’all Do
Have each group use Notes or Pages to write a script that explains the concepts in their objective. Their purpose is to explain the concepts in a way that is interesting, informative, and concise. They should write their script so that someone who has not heard the information before could understand it. Encourage them to include their own unique voices in their writing while still being clear and focused on the topic. Once their script is written, look over their work and offer suggestions for improvement and edits. (Attached at the bottom of this section you will find a sample script.)

Next, have each group create a storyboard that will help them plan how they will transform their script into a documentary — one that uses audio and visuals to more clearly explain and keep the audience’s interest. Have the students create their storyboard in Pages, Notes, or Keynote. (Attached at the bottom of this section you will find a sample storyboard.)

You Do
Now that the groups have planned and received feedback from you, it is time for them to conduct and film their experiments, create the multimedia they will use in their documentaries, and combine and edit it all in iMovie.

Following the experiment, each group should generate Graphs or charts that display the data collected from the experiment. At this point, they may need to go back and edit their script to include a description of what happened during the experiment and to summarize what the data shows and what was learned.

Each group will use iMovie to create the documentary they outlined in their storyboard. They should import, organize, and edit their photos, graphics, graphs, charts, and experiment video footage. Then, they should add titles to their project for clarification and focus on important points. They will then record themselves reading their script using the voiceover microphone tool in iMovie. They may need to record in pieces to make it easier to align the voiceover with the correct visuals in their project. Finally, they should add music that enhances, but does not detract from, their project. For help using iMovie, visit Apple’s online iMovie guide.

The teacher should observe student progress throughout the experiment and filmmaking process to gage student understanding and offer additional support or extension opportunities as needed.

The scripts and storyboards created by the groups are good indicators of student progress and provide opportunities for feedback and correction as needed.

When each documentary is completed, it is a good idea to preview the projects and offer feedback and suggestions before their final project is due, particularly if this is the first film the students have made. When the final draft is ready, have the students export the file to their desktop, then upload the file into Google Drive for easy sharing with you. Have them submit their projects to their district film festival or other competition, and then hold a viewing party with your whole class. Have the students AirPlay their documentaries for the class to view. Popcorn is recommended.

The rubric attached at the bottom of this section can be used to evaluate your students’ final projects and their mastery of the lesson objectives.

Remixed from Lesson Plan Template on Apr 30, 2021 by Katie Blunt