Indicator: Evaluate the course of events of the Civil War and its impact both immediate and long-term. 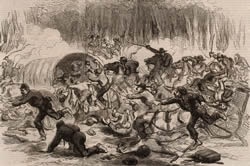 Essential Question: How did the battles at Bull Run affect early attitudes and confidence about the purposes of the Civil War?

Bull Run was one of the earliest battles of the American Civil War. And there were actually two battles at Bull Run. The Bull Run battles are also known as the Battles of Manassas (this is the name that the Confederate army gave the battles). Manassas Junction, Virginia was a town about 30 miles southwest of Washington, D.C. It was a small town, but it had a strategic railway line.

Fort Sumter had been fired on in April 1861. The First Battle of Bull Run took place in July of 1861, and so the war was new, and new-recruit soldiers were still unseasoned. The Union army (with soldiers still "green" and not yet fully trained) was pressured to attack the Confederate army near a creek called Bull Run which was just north of Manassas Junction.

A second battle took place at Bull Run in August of 1862. This battle was larger, longer, and more deadly. Who were the key military leaders on both sides? Which side won? What were the consequences of the Second Bull Run for both sides of the conflict?

Students can use the great Utah's Online Library tools to further their research of Bull Run as well as other Civil War events.

Many of the EBSCO and Gale resources are magazine and journal articles which means student researchers will access a wide variety of hits as they do their initial research. Be sure to remind them to use quotation marks around search terms such as "bull run". This will help limit their hits to articles specifically about the Battle of Bull Run. If they search for just bull run (with no quotation marks), they will get articles that simply contain the words bull and run somewhere in the text which means that their search will result in articles about the running of the bulls in Pamplona, Spain. For help with searching databases successfully, see your school librarian who is an information expert.

Gale's Research in Context Grades 6-8 has over 150magazine/journal articles about Bull Run as well as many other reference materials including primary sources.

Gale's InfoTrac Student Edition has over 400 magazine/journal articles as well as books, news articles, and images.

Gale's Student Resources in Context has encyclopedia information and over 300 magazine/journal articles. From the menu items on the right, click on Reference which will narrow the hits somewhat and will offer excellent information.

World Book Encyclopedia has an article about Bull Run as well as maps.