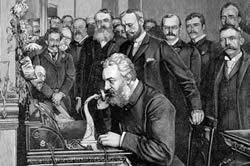 Essential Question: How has Alexander Graham Bell's most important invention, the telephone, impacted the way we live? How has the influence of technology led to changes in society?

Alexander Graham Bell's first words on his new invention, the telephone, were to his assistant, Thomas Watson. He said, "Mr. Watson--come here--I want to see you."

Did you know that you can find further information about Mr. Bell in a database called Biography in Context which is part of the Gale Reference Collection in Utah's Online Library?

You can find out that Alexander Graham Bell was born in Scotland and attended Edinburgh University. His father and grandfather were both elocution experts; elocution is the study of speaking clearly with correct pronunciation and with articulation. So it's no surprise that Alexander Bell was interested in designing a way to transmit vocal messages.

He eventually moved to Canada and then to the United States. Alexander Graham Bell made a living teaching deaf students. He even taught Helen Keller! Alexander Bell married Mabel Hubbard who was deaf.

In his later years, Alexander Graham Bell was president of the National Geographic Society. He was also very involved with aviation and breeding sheep. He was an accomplished and interesting man!

World Book Encyclopedia has an excellent article about Mr. Bell where you can read about Mr. Bell's efforts to create a medical device that would locate bullets in the human body. He used this device on President James Garfield, the 34th President of the United States, who had been shot by an assassin in 1881. (Unfortunately. President Garfield still died).

eMedia has a 23-minute social studies video called 19th Century Turning Points in U.S. History 1871-1881 which contains information about Alexander Graham Bell's invention of the telephone as well as other notable events during that time period. The information about Mr. Bell is located at minute 9:17 in the video.

The EBSCO collection contains many resources about Alexander Graham Bell. The Science Reference Center contains journal and periodical articles about Mr. Bell. Explora Middle and High School as well as the Explora Elementary School also has magazine articles on the topic of Mr. Bell.

In the section called General Resources, Utah's Online Library contains a link to the Library of Congress where you can find pictures of Alexander Graham Bell (he was known for his well-trimmed beard) and primary sources such as letters written to him by students, letters to him written by his wife, letters he penned to various people, and poetry he wrote. There is even a family tree showing Alexander Graham Bell's lineage.