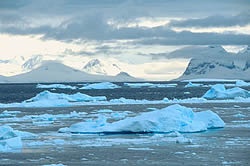 Essential Question: How can the study of geography help us to better understand the world?

Antarctica is an ice-covered continent. It is 1.5 times bigger than the United States. It is the coldest place on Earth.

Antarctica has its own bodies of water. It has 300-400 subglacial lakes. Most of the lakes lie beneath thick ice sheets, and many of the lakes are still liquid beneath their thick covering of ice. Antarctica's largest lake is Lake Vostok. Have your students use Utah's Online Library's useful Gale resources to discover 5 facts about Lake Vostok.

Antarctica's highest mountain is Vinson Massif. Have students compare and contrast this mountain with Mt. Everest, K2, or Denali (Mount McKinley) in terms of height, weather conditions, and geologic origins.

Describe how the Transantarctic Mountains which run across the southwest part of the continent contribute to the weather conditions on the continent.

Besides the main Antarctic continent, what are some of the main islands that are part of the country/continent of Antarctica?

Mount Erebus is an active volcano on Antarctica. Where on the continent is it located? Describe how often it erupts and the effects of its eruptions on the surrounding areas. What are some of the inactive volcanoes on Antarctica?

The South Pole is an actual specific spot on the continent of Antarctica and designates the southern end of the Earth. How is the spot marked? What kinds of man-made physical structures are nearby the pole? The actual location of the South Pole has to frequently be re-located and re-marked. Why?

The temperature on Antarctica can get as low as -120 Fahrenheit. Have your students describe weather conditions in general for this cold continent. How does the weather differ from summer to winter?

The Southern Ocean surrounds Antarctica. Parts of the ocean freeze during the Antarctic winter and make the continent almost twice as big as during the warmer summer months. Have students use the Gale Reference Collection to research animal and plant life in the cold Southern Ocean.

Antarctica has the cleanest air on Earth. Why?

Antarctica is often considered to be the windiest place on earth. What are the geographic conditions and weather patterns that make this continent so windy?

Much of Antarctica is considered to be a desert. Why?

What animals live on Antarctica? What adaptations help the land and ocean animals live successfully in the cold environment? Describe how plants such as lichen and algae have adapted to living on this cold continent.

Antarctica does not have its own government. It is watched over and governed by 29 countries that work together to protect the environment and create organizations for further research and study of the continent. What are some of the countries that "govern" Antarctica? Gale's Global Issues in Context can help students learn about the unique governing body of Antarctica.

Does Antarctica have permanent human residents? About how many people are usually living on the continent at any given time?

James Clark Ross, Robert Falcon Scott, Ernest Shackleton, Roald Amundsen---how are they associated with Antarctica? Have students use Gale's Biography in Context to discover further information about these men.

There are so many things to study and learn about Antarctica. Utah's Online Library has hundreds of articles to help students with their Antarctic research.