Indicator: Determine human rights and responsibilities in the world.

Standard: Students will understand how revolutions have had an impact on the modern world.

Indicator: Students will identify the civil rights objectives held by various groups, assess the strategies used, and evaluate the success of the various civil rights movements in reaching their objectives, paying specific attention to American Indian, women, and other racial and ethnic minorities.

Indicator: Students will select a recent event they think will be worthy of remembering, recording, or interpreting, and make an argument for its potential historical significance. (history)

Indicator: Students will research issues of civic importance in which city, county, tribal, or state governments have a role. Students will use their research to develop and write a policy proposal to the appropriate governmental entity, such as a board, commission, council, legislator, or agency. (civics) 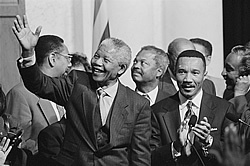 Essential Question: Can one person change the world?

The man known as Nelson Mandela was named Rolihlahla at his birth in 1918. His father was chief of the Thembu tribe in South Africa. His father had three wives and thirteen children. Rolihlahla was the first child of his father's 3rd wife. Have students research the life of the remarkable man we know as Nelson Mandela. What was his life like as a young child? How did he come to live with another tribal chief named Jongintaba? How did his life change after he moved to the household of Jongintaba? How did Nelson Mandela's education prepare him to have a job during the 1940s? South Africa had a system of segregation called "apartness"; in Afrikaans, the main language of the majority of white settlers of South Africa, the word was "apartheid". Have students research what apartheid was and what life was like for black South Africans under apartheid.

How did Nelson Mandela come to be imprisoned? How long was he imprisoned? After his release, what are some of the things that he accomplished as the first black president of South Africa?

How has the life and legacy of Nelson Mandela changed the lives of black individuals throughout the world?

If students are using Gale Reference Collection Grades 9-12, they can use the Power Search feature at the top of the listing of databases. They will find more than 6,700 magazine articles, articles from more than 2,000 academic journals, more than 150,000 newspaper articles, and dozens of images, videos, and audio files. If students want to analyze which topics are referred to most frequently in the various articles, they can scroll down the menu on the right of the Power Search hits and choose Topic Finder. They will see a visualization in either wheel or tile layout.