Standard: Students will address the causes, consequences and implications of the emergence of the United States as a world power.

Indicator: Students will select a recent event they think will be worthy of remembering, recording, or interpreting, and make an argument for its potential historical significance. (history) 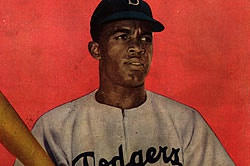 Jack Roosevelt Robinson was born in 1919 in Cairo, Georgia. He was the youngest of five children. His grandparents had been slaves. His parents were sharecroppers. His father left when Jack was a baby. His mother, Mallie, had relatives in California, and she moved with her five children to southern California. Mallie worked as a maid and eventually bought a home near Los Angeles. Jackie was very good at sports when he was in school. By the time he was in high school, he excelled at track, baseball, and football. Jackie's brothers, Mack and Frank were also good at sports. His brother, Mack, qualified in track to go to the 1936 Olympics in Germany. The gold medal in the 200-meter dash was won by Jesse Owen, and Mack won a silver medal in the same event! He arrived at the finish line only a half-second behind Jesse Owens. The sports acclaim did not ultimately help Mack in the non-sports world. He eventually took a job as a street sweeper because there were so few opportunities for African Americans.

Jackie was accepted to UCLA and became a star basketball player. He also successfully played on the football, golf, and tennis teams. He chose to leave UCLA in order to earn money. He worked at a few jobs including playing semi-professional football in Hawaii. He left Hawaii just days before the 1941 attack on Pearl Harbor. He was soon drafted into the army and was able to attend Officer Candidate School. What were the circumstances around an accusation and military trial that Jackie was involved in while at Fort Hood, Texas?

Jackie was discharged from the Army in 1944 and soon began playing for one of the all-black baseball teams, the Kansas City Monarchs. As Jackie toured around the country with the baseball team, what was life like for them? Where did they sleep when they were in a town with no all-black hotel (since they were not allowed to stay in a white hotel)?

Have students describe how Jackie came to be recruited by the Brooklyn Dodgers in 1945. Trivia question: How did the Dodgers get the name "dodgers"?

What were some of the obstacles that Jackie faced as he first began playing for the Dodgers' minor league team called the Montreal Royals and then eventually for the Brooklyn Dodgers?

What was Jackie Robinson's involvement with Martin Luther King, Jr. and the Civil Rights Movement?

Jackie Robinson became the first African American ever inducted into the Baseball Hal of Fame.