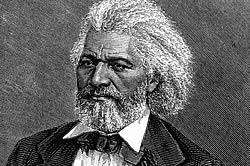 Essential Question: How did Frederick Douglass use his oratorical skills to promote freedom for all people?
Frederick Bailey was born into slavery in Maryland about 1817 or 1818. His mother was sold to a neighboring farm when he was a young child, and he was cared for by his grandmother. He never knew who his father was, but it was surmised that his father was probably the master of the plantation where Frederick was born. The owner of that plantation was Aaron Anthony.

When Frederick was about 8 years old, Mr. Anthony sent him to Baltimore to be loaned out to relatives, Hugh and Sophia Auld. The Aulds had never had a slave before. Sophia Ault was kind to Frederick. She began to teach him to read because she didn't know that slaves were not supposed to be given that opportunity. When her husband realized that reading lessons were taking place, he stopped them immediately. Frederick later wrote that Hugh Auld told Sophia, "If you teach him how to read, there will be no keeping him. It would forever unfit him to be a slave."

Frederick Bailey, however, continued to learn on his own. He would scratch letters in the dirt. He read signs and posters as he went about the town doing work for the Aulds. By the time he was 12, he was able to read newspapers that he came across as he frequented the shipyards of Baltimore. He learned about the abolition movement from these newspapers.

When Frederick Bailey was 15 years old, his original master, Aaron Anthony died. Frederick was required to return to the plantation because he was part of the property that needed to be divided up. Frederick was hired out to work for a neighboring farmer. Secretly, he began to teach other slaves to read by scratching words in the soil.

He and a few other slaves made plans to escape. One of the house slaves stole paper and a quill pen, and Frederick wrote notes for himself and the other slaves giving them permission to travel to Baltimore. Their plan was discovered, and the slaves were sent to jail for a week. Frederick was eventually sent back to Baltimore to the Auld family. Within a few years, he was helped by the Underground Railroad network and escaped to New York.

Frederick changed his name to Frederick Douglass. He became a lecturer and author. He made his way throughout the North and gave speeches as part of the abolition movement. He traveled to Great Britain and gave anti-slavery lectures there.

In the 1840s, he started an abolitionist newspaper and wrote several books about his life as a slave.

Frederick Douglass's legacy became about education and learning and dignity and freedom for all human beings.

Have students write about what their lives would be like if they were not allowed to learn to read.

Students could research about Frederick Douglass's travels to Great Britain, how he was received there, and how he considered moving his family there.

Who was William Lloyd Garrison? Students could write about Frederick Douglass's relationship with Mr. Garrison.

Even though Frederick Douglass lived in New York and Massachusetts which were non-slave states, he was still considered to be a fugitive slave. He and his wife were ever mindful of being ambushed by "slave catchers". Have students research how slave catchers worked, if what they did was legal in the North, and what happened to slaves who were captured and returned to the South.

What was the relationship between Fredrick Douglass and Abraham Lincoln?

Gale's Biography in Context which is part of Utah's Online Library is a great resource for student research. The database contains detailed biographical information about Frederick Douglass. It also contains many academic journal articles and magazine articles about Douglass. Biography in Context is helpful in that it also links to external websites for even more information. EBSCO's Biography Reference Center has many different biographies of Frederick Douglass that students can choose from. The interface in EBSCO's Biography Reference Center is easy to navigate and provides interesting browsable biographical collections from the menu on the right.