Learning Domain: Self, School, and Community

Standard: (Citizenship): Students will recognize and practice civic responsibility in the community, state, and nation.

Learning Domain: Self, School, and Community

Standard: (Citizenship): Students will recognize and practice civic responsibility in the community, state, and nation.

Standard: Students will understand the rights and responsibilities guaranteed in the United States Constitution and Bill of Rights.

Indicator: Discover the basis for the patriotic and citizenship traditions we have today (i.e. Pledge of Allegiance, flag etiquette, voting).

Indicator: Students will explain how documents, challenges, events, and ideas such as the rule of law, the social contract, compromise, the Declaration of Independence, the Articles of Confederation, Shays‰Ûª Rebellion, and the Federalist Papers significantly influenced the United States Constitution. 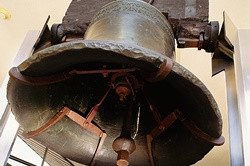 Essential Question: How do national symbols unite us in feelings of patriotism and in common causes?
Thanksgiving: What are its true origins? How long have Americans officially celebrated Thanksgiving? Are there other countries that observe days set aside for giving thanks?

The famous cracked Liberty Bell…..what is its story? How did it crack? How is it a lesson in quality control?

In 1751, the people of Philadelphia wanted a bell for the large building that they used as an assembly hall (also called the State House and later called Independence Hall). So they ordered a bell from England, and it arrived in 1752. It was hung in 1753. At the very first long-anticipated ringing of the bell, it cracked. Rather than send it back to England, two men, John Pass and John Stow, were hired to fix it.

Mr. Pass and Mr. Snow melted the bell down, added some copper to it to make it stronger, and cast a new bell. When this new bell was first rung in late 1753, it sounded bad! Too much copper in its composition caused it to not have a melodious ring. So Mr. Pass and Mr. Snow melted the bell down again. This time, they added tin to the melted metal. When this bell was rung, it sounded a little better but still didn't sound as good as the people of Philadelphia wanted. So they ordered a new bell from England. In the meantime, the less-than-perfect-sounding re-cast bell was hung in the steeple of the State House. When the English bell arrived, it was hung in the clock tower of the State House. But it was the American-made steeple bell that was rung for important occasions and which later became known as the Liberty Bell.

In 1775, at a special meeting in Philadelphia, the Declaration of Independence was written by delegates from each of the 13 colonies. The declaration was first read aloud to the public on July 8, 1776 just outside of the State House. At the end of the reading, bells around the city rang out, including the bell in the State House steeple.

During the course of the American Revolution, the new American colonies were fearful that the British would capture cities, steal their bells, and melt them down to make ammunition and cannons. In 1877, the bell in the Philadelphia State House was taken down (along with other Philadelphia bells) and hidden. At the end of the war, bells were returned to their original places.

For many years, the bell in the State House continued to be rung for important occasions in Philadelphia. No one is sure when and how the twice-refurbished bell broke again. But it was officially determined to have a crack in 1835. And for many years after that, it was quiet and somewhat forgotten. Then in 1846, the bell (now called the Liberty Bell) was chosen to ring as part of a celebration of George Washington's birthday. Workers drilled some strategically placed holes in the bell to keep its cracked edges from rubbing against each other. When it was rung for the birthday celebration, however, it cracked even more, and the damage was permanent and unfixable. That was the last time that the Liberty Bell ever rang.

Over the years, the Liberty Bell became a symbol of freedom to people supporting the abolition of slavery, to women seeking voting rights, and to people championing the basic rights of all individuals.

Utah's Online Library has numerous resources to aid students in their study of the Liberty Bell. Using Gale's Kids' InfoBits, EBSCO's Explora Elementary and Middle Schools, and World Book Online Encyclopedia, younger students can find images, magazine articles, and encyclopedia information about the Liberty Bell. Secondary students will find Gale's Research in Context Grades 6-8 a helpful resource as well as Gale's InfoTrac Student Edition. In InfoTrac, have students do an initial search for "liberty bell" and then choose Content Type from the menu on the right to further narrow their search.