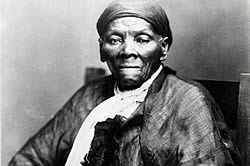 Essential Question: How did Harriet Tubman devote her life to helping slaves escape to freedom and furthering the rights of African-Americans?

Harriet Araminta Ross was born in Maryland in either 1819, 1820, or 1821 (sources differ). She and her parents and 10 siblings were owned by the Brodas family and worked on the Brodas plantation. Harriet's mother was also named Harriet, and so young Harriet was usually called Minty when she was a child. Young Harriet worked in the fields as a child and was also loaned out to neighboring families to do farm work and housework.

Have students make a timeline of the events in Harriet Tubman's life. Have them include an incident where Minty took a taste of sugar from a home that she was working in and a time when she refused to chase after a slave and was hit in the head with a heavyweight. Have them include her marriage to the freeman, John Tubman. They can include her escape to freedom, her activities to help other runaway slaves, and her years as a conductor on the Underground Railroad. Encourage students to locate actual photos of Harriet to use in their timeline. They could locate and include an image of the ad that her master, Mr. Brodas, posted offering a reward for her capture and return. They could include her efforts in the Civil War, her time in New York, and her marriage to Nelson Davis.

Harriet helped over 300 people escape to freedom. She and the people she helped were never caught; Harriet had a 100% success rate.

How was Harriet Tubman influenced by Nat Turner? Why is she sometimes referred to as "Moses"? How many of her family members did Harriet eventually help escape? What happened to her husband, John Tubman? What are some of the different ways that Harriet helped people escape? How much was the reward for her capture? What role did Harriet play in the Civil War?

Utah's Online Library has many aid students in their study of Harriet Tubman. Have students use EBSCO's Explora Elementary to locate details of Harriet Tubman's life (from the list of hits, filter the results by choosing Biography from the choices at the top of the page). Gale's Kids InfoBits Grades K-6 has more than 60 magazine articles, 3 images, and several excerpts from books. Articles in Kids Search and Kids InfoBits are geared to primary-aged reading levels. Gale's Research in Context Grades 6-8 has audio files of broadcasts and podcasts about Harriet Tubman as well as magazine, biography, and reference choices. Gale's Reference Collection Grades 9-12 contains more than 600 academic journal articles, numerous book excerpts, and archival images. When using Gale's Reference Collection 9-12, be sure and use the Limit Search by feature from the menu on the right and choose Full Text. eMedia contains the Reading Rainbow video of Follow the Drinking Gourd. In Utah's Online Library, students will also find numerous resources for their study of the Underground Railroad to supplement their study of Harriet Tubman.